Hey guys, I've been home for the past week since I forgot to bring some things to my apartment (OK....pile it on) so I decided to get a little fishing done before heading back. This is somewhat of a large report since I wanted to get a good amount of fishing done before my work begins in earnest starting tomorrow. This doesn't mean that I'll stop fishing for the rest of the summer, it just means that there will be less reports in the foreseeable future. Thank you to all my blog readers for making this journey easy, I have been keeping tabs of all the page views and comments and I've also personally received very kind words. I hope you guys enjoy this report and I'll try to keep you updated once a week or so going forward.

Day 1:
I made it over to my favorite local native stream in northern Mass. I decided that a smaller mountain stream such as this would fish better on such a warm day and I was somewhat correct. The water was lower than it had been the last couple of times I fished it and was starting to get warm (did not have a thermometer). I started off fishing a small stretch of pocket water without any hits. I moved up to a small pool where I managed a nice native. 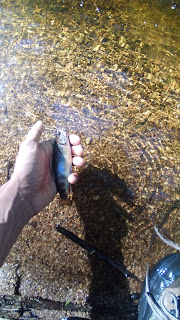 I took a quick photo and let it go. The rest of the day was much the same: find the pools, find the fish. While the fish were scattered throughout the riffles and pocket water last time out, this time they congregated in pools. Due to the warmer temperatures, I decided not to take too many photos as to not stress out the fish. I even managed a nice photo worthy native brookie (10-12 in.) but didn't take one since neither the fish nor my phone were cooperating and I didn't want to stress it much further. The final count for the day was 5 of 7 brookies, 12 or so fallfish, and 1 pumpkinseed sunfish. All fish were caught on either soft hackle hare's ear or pheasant tail nymphs.
Wanting to catch a couple fish on dries, I went to a local designated wild trout stream near my house. These bodies of water are identified by New Hampshire Fish and Game as having strong native brook trout populations and are protected by a shortened season (Jan. 1st to Labor Day) and limited to artificial lures or flies. Since I didn't have too much time, I decided to fish a large pool under a bridge. Unfortunately, I only hooked into one fish and didn't get anything else. I was feeling a little discouraged since brookies are often very aggressive but chalked their finicky nature to their accessibility to most anglers (hello? main road). In fact, I fished this stream during my first year fly fishing and for the longest time, I actually thought that brookies were the hardest trout to catch (funny how time can change things).

Day 2:
Feeling restless from the previous evening, I decided to try the wild trout stream again. I reasoned that this time, I would have better luck fishing more out of the way spots. My first spot was a nice meadow stretch characterized by small oxbows and deep holes. I made my first cast upstream and immediately got into a nice native! I fished for a few more minutes, working my way upstream until I got to a nice bend. Due to the tall reeds on the shoreline, I wasn't able to work all of it casting from downstream so I snuck upstream and dead drifted my offering downstream when another one nailed it! 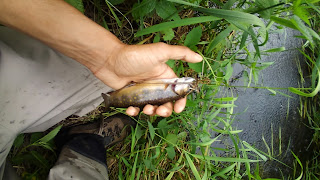 Sorry about the reed on its face, I decided to take the photo as is and get the fish back into the water as quickly as I could. I fished upstream to another nice pool but this is where things got a little frustrating. Every single cast, I kept getting hit (even had two jump out of the water at the same time) but they kept missing the hook. On the umpteenth cast, I hooked one but it got off soon after. This was apparently enough to spook the entire pool so I moved downstream working areas as I went. Unfortunately, this place was thick with mosquitoes so I didn't stop or fish a lot of great looking water as well as I would have liked to. This nice bend pool produced a decent brookie skittering a dry back. The beauty of these backcountry streams is that they have so much overhanging cover and obstruction that it makes presenting a fly difficult. This makes catching fish all the more satisfying. 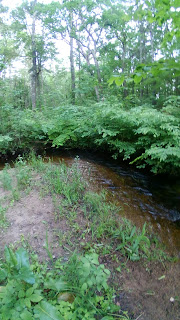 I continued to fish downstream and managed to get one more fish, lose a couple more, and miss a number of strikes including one really nice one. I didn't hang out nearly as long and wasn't as meticulous with my presentations as I'd hoped since I was driven half insane by the amount of mosquitoes that had shadowed me all day. By the time I got home, my forearms were bumpy and red but that is all in the fun (although it would be more fun without those damn things).

Day 3:
I decided to head to the warm water pond across the street from my house for a quick evening trip since I didn't want to get ravaged by mosquitoes again. I caught at least a couple dozen bluegills and one bass all on dries. I found a good number on nests but only caught and released a couple since they hit on every cast. By the end of the day, my fly was destroyed but it was a fun evening. 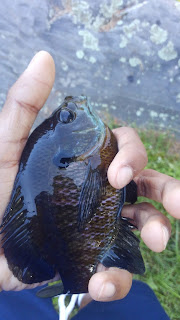 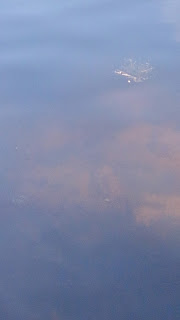 This photo isn't great because of the glare but you can make out the nests easily. 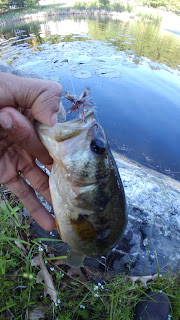 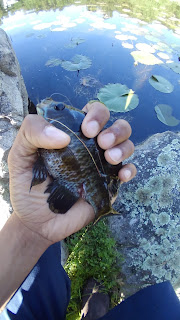 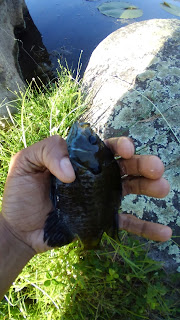