I decided to take a trip down to a local freestone near UNH since I had a couple hours to myself after moving into my apartment. The stream was still flowing high from last week's rain but it was much more fishable so I decided to give it a go. Unfortunately, the fishing started off really slow with one missed trout and a couple of fallfish on nymphs. I spend the first part of the day experimenting with a new setup where I included some sighter material onto my leader so I could go back and forth between indicator and tightline nymphing. However, the sighter sank at a slower rate than the butt section above, creating a very unnatural drift. What was worse is that I wasted even more time switching back to my traditional set up (if it ain't broke....).
Frustrates with having wasted so much time, I ended up moving upstream where I caught a couple brookies chucking streamers, which immediately improved my mood. While I was happy to get onto some fish, I was determined to get some on nymphs to field test the new leader. 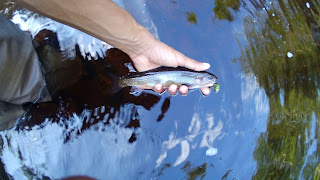 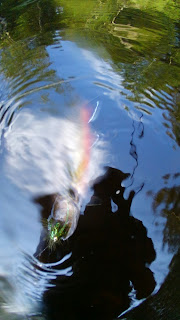 As I continued upstream, I got into some more fallfish nymphing some pocket water. While they weren't what I was looking, they did help me fine tune my approach with a new leader (where to put my indicator, how long the tippet should be, etc.). Eventually, I reached a nice run where I nymphed up two more trout including a decent rainbow, a brookie, and a few fallfish. The fallfish and brookie hit the nymph as I lifted up to cast, which goes to show, the drift isn't over till it's over. The brookie was actually a fairly interesting catch since it was smaller than the previous 2 brookies, fairly dark in color, and contained some blue ringed halos that the first two fish lacked. At first, I thought it was a native but I was disappointed to see that it had slightly beat up fins (no pics unfortunately). I've heard that this freestone does contain natives in upstream sections so it gives me a little hope but the fact that I haven't caught any 2 in. brookies in this particular section pretty much dashed my hope. 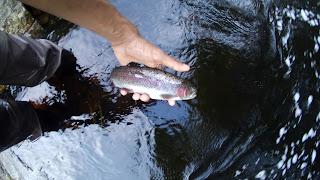 After walking downstream towards my starting point, I saw some risers (some of which jumped clear out of water!) so I decided to take a few casts. On my first cast, I caught a decent brookie that sipped down a mosquito pattern but ended up putting down the risers due to the commotion. I walked further downstream where I caught a fallfish and put down another fish before deciding to call it quits since I had other commitments. All in all, it was a great end to a slow day and it felt awesome to get some dry fly action.
Posted by NHwildbow on June 11, 2017