Out on the Yak

Colby and I hit a warmwater pond near his house to target some spawning bass a couple days ago. I hadn't fished for bass as much as I'd hoped this year so I decided it was a better time than any with all the rivers in flood stage. From what I had heard, action has been slow all season due to the weather. On warmer days, the bass have been on the spawning beds but on cooler days, they've disappeared for deeper water. Since the weather had been warm for a stretch of days, I expected to see fish on their beds. 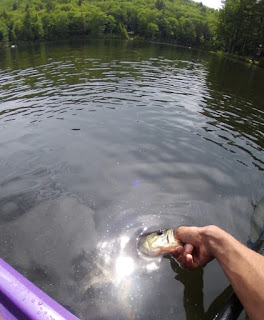 Overall, the fishing was very good. I caught a nice mixed bag of species: 3 bass, 2 pickerel, 3-5 perch, 2 sunfish (pumpkinseed and bluegill). Colby, by far won the numbers game by catching over a dozen sunfish, 2-3 bass, several perch, and one pickerel. He was using a combination of dries and small leech patterns while I threw a large wooly bugger hoping to piss of a big fish enough to strike. 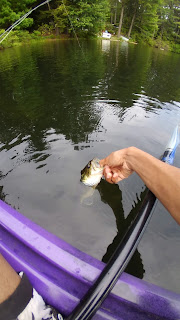 By far there seemed to be many more sunfish nests than bass nests. According to Colby, most of the bass had apparently already spawned before I got there so we were fishing for the last few stragglers. This initially came as a surprise since I had heard the spawn was actually delayed due to the cold weather. I guess the vast expanse of shallow, sun soaked flats must have had something to do with it... 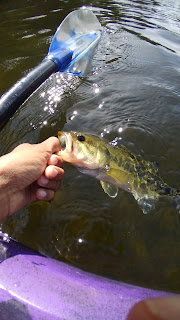 All in all, the action wasn't quite as hot as I originally expected it to be but I wasn't all that upset considering. 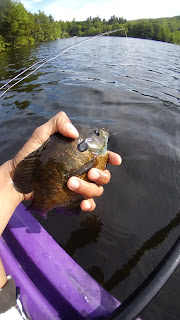