A Quick Trip and RAGING Water

I went out for a short evening trip to a local freestone with Pete today. With the torrential downpours that we've experienced in the last couple of days, we knew it was going to be tough but after being shut in, we desperately wanted to get out. The water was raging as expected, maybe more so than yesterday but it was somewhat warmer so we figured the activity would be up. The fishing was tough to say the least. With the increased flows, it became hard to maintain a proper dead-drift. After adding a healthy pinch full of tungsten putty and slapping on a #12 BH head pheasant tail as an anchor fly, I was able to hook up with a decent brookie. After catching that fish, I let Pete take the spot since he wasn't having too much luck up until that point and since stocked trout tend to pod up. Soon after, he hooks up and suddenly the day was not a complete bust. I tied on a streamer but didn't have too much luck after while Pete could only manage a couple more hits before we had to leave. On the way back to the car, we met two other UNH students who were just pulling in. One of them, who works in the same lab I do, was there with her boyfriend who had his fly gear with him. We told how we did and gave them a few tips based on what we saw today. Hopefully they caught a few fish as well! 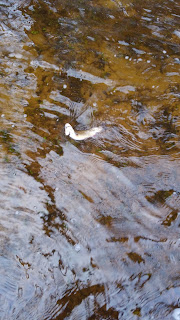