That is the best way to describe it. I was able to find a little time to get out yesterday so I decided to take a look at the stocking report and follow it. My buddy Pete joined me for the day. Out first stop of the day was the Suncook River in Gilmanton. The section we were fishing looked more like a north country stream, very nice, remote and serene. The only problem? There were no fish! Or any evidence of fishermen or recent fishing activity for that matter. After a few casts in each likely looking area, we decided to head back and hit the Isinglass. The section we planned to fish was actually on the way to the Suncook but when we passed it, there were about 10-15 cars spread out over all the access points on RT 126 and it got HAMMERED.
By the time we got back, all the cars had cleared out and we had the spot to ourselves. After fishing for about 15-20 mins without getting a single bite, we figured that the spot had been cleaned out. Our fears were all but confirmed when we saw fish heads, guts, and other garbage littering the banks. Determined not to get skunked, we continued to fish on. Just as we were about to call it, I hooked a lively brookie that soon came to hand. A couple minutes later, Pete managed a brookie as well. We both fished on for a few more minutes with only one more bow to hand before calling it a day. Both fish came on a #18 Hare's ear flashback nymph that I tied the night before. Despite the slow start to the trip, we were both very satisfied with catching the fish we did and it was certainly a huge boost to our spirits going into the season.
Today:
Following a hot tip from one of my friends, I hit a local freestone that had been stocked very recently with Pete and another friend Matt. Both Pete and Matt fished spinning gear while I fly fished. Early on, both Matt and Pete got on the board while I was setting up and tying on my flies. As soon as I got my rig tied up, I got on the board with a beautiful brookie that took a #18 BH flashback Hare's Ear. 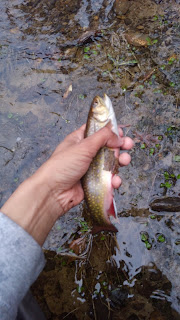 I got into several more, all evenly split between the Hare's Ear and an unweighted #18 pheasant tail. Once the action on the nymphs died, I decided to change tactics and fish wooly buggers, which brought some more fish to hand.
Once the bites stopped altogether, we decided to stop by the Lamprey in Lee to see if it had gotten stocked yet. The same friend from yesterday, Colby, had told me that he fished the Lamprey in Durham and gotten only a few follows and lethargic hits before moving to the smaller stream so we figured that the section in Lee had been stocked as well. We only fished for a few minutes on the Lamprey since we were cold and wet but we didn't register any bites. Maybe it hasn't been stocked or maybe they were lethargic? We didn't stick around long enough to answer that question. How's everyone else been doing recently? 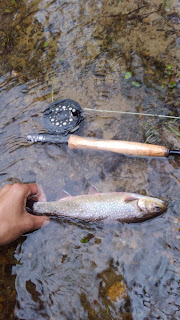