I went out to the Cocheco for a couple hours yesterday morning to scratch the itch. I knew the water would be high but it had come down a little so I decided to give it a go. When Pete and I were walking downstream, we ran into a couple of anglers, one of whom reported no success and another who said who lost a few fish. I guess that it is par for the course when fishing in high water since the fish can get downstream of you before you even know whats happening. When we got to a likely looking spot, we saw another fly angler. We worked in well downstream of him but didn't get too much so we moved upstream. Pete ended up losing a couple spinners and I took a dip in the drink trying to retrieve his last one. I worked my way upstream and found some fish in a nice seam in a large pool. Unfortunately, I didn't land any or even get a look at any for that matter. Once Pete came upstream, we decided to head out to a different spots after getting no more hits. On the way out, we met a couple who were spin fishing and had a nice bow on a stringer. They were the only ones who appeared to have landed anything all morning.
The second spot we hit was our ole' reliable freestone 5 mins away from campus. Unfortunately, it wasn't quite that when we got there since we ended up 1 trout each and a creek chub I got. We saw a bunch of bugs hatching but nothing was rising. We figured the fish were either being way too finicky or they were fished out. An abandoned nightcrawler tin seemed to confirm the latter. All things considered, we were both happy not to get skunked but sort of bummed that things didn't turn out better. 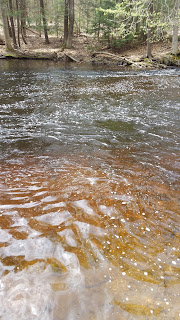 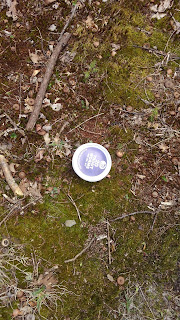 I went out later last evening to the Old Durham Reservoir after dinner and had an absolute ball. The wind was gusting like crazy and no hatches were coming off. All fish came on wooly buggers. I caught well over a dozen gills and pumpkinseeds and one largemouth bass as the sun was setting. One of the gills had some awesome tiger stripes but unfortunately I wasn't able to get any photos since my phone was charging. In the future, I may be able to snap a few photos of these fish as they get into their spawning color since this spot is perfect for an after class or after work visit. I will be back!
I went out again today and after a tough start, I changed things up and ended up with a couple of bows including a pig of a holdover. More in the next post!
Posted by NHwildbow on April 30, 2017