First Souhegan Trip of the Year

I finally made it out to the Souhegan River today for the first time this spring. The Milford gauge read 57.0 ˚F, which got me excited. My first stop was a local stocking site in Milford where I've had luck before. I managed only one take over there, a small brown which got off after a very brief battle. I saw it come up for my indicator twice until I changed the angle of my drift and leader length. By the time it took, the indicator was close to me, resulting in a weak hook set. The spot must have been cleaned out since all other likely holding areas did not produce any further action for me. I quickly changed pace and headed upstream along Route 31 in Wilton. This area has many pullouts and is characterized by long stretches of riffles, runs, pockets, and pools. I stopped by one such pullout ahead of the DHZ (delayed harvest zone). I fished a small stretch near the pullout and I was just about to leave until I saw a nice pocket slightly deeper than the surrounding riffles. Bingo! I hooked and landed a nice little brown on a san juan worm. Before I continued fishing, I decided to pause and take in the scenery. 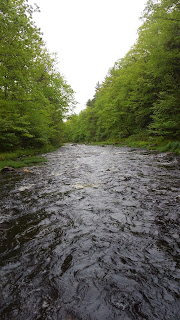 I continued fishing this spot for about an hour or so, working downstream to some nice holding water but I couldn't stir anything else so I decided to head to the lower DHZ before heading home. I started off fishing pocket water downstream of the Route 31 bridge with the same results and headed up to the large run below the bridge with the same results. I worked my way upstream to an area where I had luck last year. I found a likely looking pocket and spent some time working it. When I hit the perfect seam, I had a bow come up and hit my indicator. Frustrating, but definitely a change from getting nothing. I worked the seam hard, added weight, and switched my dropper for a large soft hackle and finally, I broke the silence with another brown! I think with the high water, these fish are actively keyed in to large flies or anything flashy to get their attention. 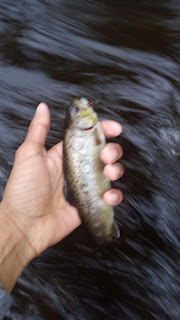 I worked that seam even harder to try and tempt another fish but no takers. I worked upstream to some more nice pocket water but turned around after I took a dip trying to cross the stream. It wasn't the greatest day I've had but it wasn't terrible considering the fantastic views punctuated by the occasional fish. 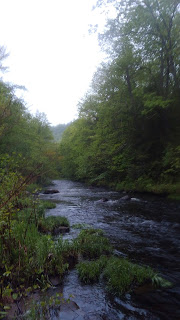