I had a few hours to get out yesterday so I decided to head back to the Cocheco to try my luck. The flows had fallen back to almost normal levels so I figured I would have a good day. I went back to the same pool that I was having luck in the day before to see if I could land any of the fish I lost. What a difference a day makes. I was using the same flies and the same set up but besides a couple half hearted takes, I spent the hour or so "practicing my dead drift." In the run upstream of me, I saw a spin fisherman pull out a stockie on an oversized spoon so I figured I would try something larger and more aggressive. After spending some time swinging and stripping a wooly bugger, I decided to go back to nymphing and use an oversized anchor fly to get the attention of an aggressive trout. My fly of choice was a #8 soft hackle cased caddis nymph since I had heard rumors of a caddis hatch setting in. Let me tell you, it worked! Second cast, I hooked into a large holdover bow that fought more like a brown, peeling off a couple of long runs and burying itself in the whitewater at the head of pool. Luckily, I was able to land it and snap a couple of great photos. 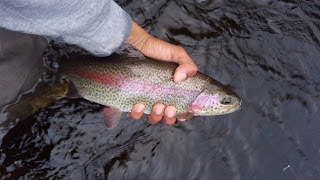 I fished the pool a little longer with no luck before moving to the run above, where I caught a small stockie bow on a #18 BH flashback hare's ear before calling it a day. The biggest thing I noticed was that the water was a lot less turbid in the run above, which probably explained why the smaller dropper worked here rather than the large anchor. All in all, it was one of the slower days I've had so far this season but it felt satisfying to adapt to the current conditions and come away with a couple of nice fish.
Update:
With the water flows still up, keeping a dead drift was tough, especially with an indicator set up. I know in these instances, euro nymphing outshines all since nothing on the surface is dragging or pulling the flies out of the zone. If anyone knows a good euro nymphing set up or where to get started in building one, please let me know in the comments or via email. Thanks.
Posted by NHwildbow on May 01, 2017