My original plan this morning was to head out to a designated trout pond to try and get onto some larger fish with Colby. Unfortunately, he didn't wake up in time and I fished it alone for a couple hours. It was almost good he didn't get up since the fishing was a complete bust as I only caught 2 fish on my first pass trolling before action completely shut off. I noticed some small brookies rising near the boat launch and as I was about to try for them, I got a call from Colby asking to meet him at a second spot. I had a little time to kill before heading there so I gave the brookies a try but they really confounded. I missed 3 fish, one on a wooly bugger, one on a soft hackle, and one on a griffith's gnat. They seemed much more interested in the actual thing than my presentations. Either that or I really have to work on my still water fly fishing.
Soon after striking out on the brookies, I decided to try the second spot.  It was a spot where a local river dumped into a reservoir and as such, had large section of moving water near the inlet. This is where I should have spent the day! I borrowed a streamer from Colby and went to work. As I was setting up my kayak and rigging my gear, Colby hooked up with a large brookie on a muddler minnow! Unfortunately, his phone was out of charge and I was far away so we couldn't get a photo. He soon caught one around the same size on a spinner, which I did get a photo of. 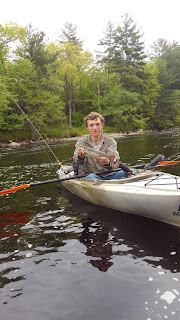 I hooked up shortly after and pulled out a white perch, not what I was looking for but OK, a start! I was getting really excited when I pulled out another couple in short order. After that, the action seemed to lull until I crossed to the other side of the rapids. It was a tough paddle in the high water and I may have been a trifle too bold but I made it to the other side. After experimenting with my retrieve, I found the low and slow was the best, letting the fly sink before bringing it back slowly. I hooked up with several crappie and a pumpkinseed and Colby got a decent larry, but again, wrong species. We started drifting down to the main lake, casting to likely structure and retrieving slowly while letting the fly swing in front of me. Finally, I got a nice tug near the main lake. After a nice fight, I pulled in this beauty: 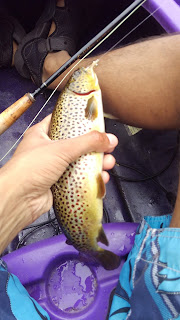 Our spirits now raised greatly, we continued drifting further towards a pod of rising fish. I let Colby try and tempt them and suddenly, he was hooked up on a massive brookie! Unfortunately, it broke off just as he was about to land it! We were both bummed since it was easily the largest fish of the day. We continued to fish on, with only one white perch brought to hand before I decided to go back upstream to the head of the run. On the way, I hooked into a smallmouth bass and yellow perch which added to my list of species for the day. When I got back to the head of the run, I worked my way slowly downstream back to the launch. At the very head, I swung the fly down and across and hooked into my personal best brookie! The fight wasn't too great although the fish looked healthy and beautiful none the less. It seemed resigned when it came in as if it knew the routine. I snapped a quick photo, unhooked it, and it shot back to its feeding lie. 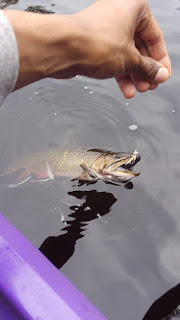 On the way back, I hooked into another brown, which I released boatside (no photo). The browns seemed to fight much better than the lone brookie of the day, throwing in head shakes, short bursts, and even jumps! I met back up with Colby, who hooked a brown, yellow perch, and smallie. All in all, it was a day well spent and a definite step up from my original plans.
Posted by NHwildbow on May 24, 2017