I haven't had too much post this past week due to the fiasco associated with the end of the semester but I was able to go on a couple of short trips. On Monday, I hit the Old Durham Reservoir at the edge of campus with Pete. It was a short half an hour trip so Pete and I managed a few fish each composed of the usual assortment gills, pumpkinseeds, and bass. This pond used to have a reputation for producing huge bass but the size has gone down since they drained it a few years ago. Still, it is nice to catch a few bass only a stone's throw away from my dorm and with the lack of predation, it has given the gills in there a chance to grow fairly large. They've even started to put on spawning colors. 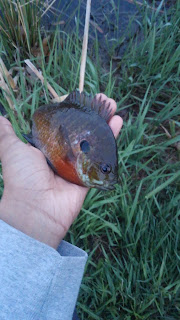 I got out once more on Wednesday and hit a local designated trout pond after hearing good reports. Unfortunately, I was stuck to the shore since my kayak is at home but I was still able to find some fish in a small cove. In a short amount of time, I landed one bow, hooked into a couple more, and missed several strikes. I didn't realize how tough their mouths actually were until today since I didn't have any sort of current to assist me. Still, it was nice to get out for a few minutes before the wind chased me out. After leaving, I stopped by a local fly fishing only pond on the way back to school but I only saw a couple rises well past casting (and wading) range. I could only watch as the fish were taunting me. I think they were rising to midges since I couldn't see any bugs above the water. Still, all in all, nice to get out. 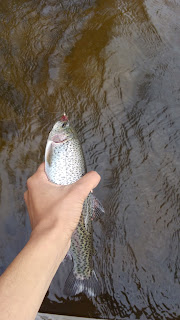 The flows are still REALLY high in some places but they are starting to come down thankfully so I may be able to hit the rivers this week. Hopefully the high water should have dispersed the fish, making for a more enjoyable experience.