I went out for a couple hours this evening. My first stop was a popular fly fishing only pond (which for the sake of backlash will remain nameless). When I got there, another angler was heading out as well. After chatting with him for a couple minutes, I found out that we had a mutual friend who goes to UNH. After assembling my rod, I met him down at the pond and we started fishing. Unfortunately, the fish were extra finicky today, which I've heard can be the case for this pond considering that it is highly pressured and tiny, and neither of us got anything. Fortunately, my new friend tipped me off about a small blue line stream where he'd caught a few natives earlier (Thanks Matt!).
I drove out to this spot and found a nice little freestone creek in the middle of the woods. Casting my flies and getting a good drift was somewhat challenging in this stream due to the amount of deadfall in the water as well as the overhanging branches but I was able to make it work. While it was far from spectacular in the numbers department (2 fish in a little less than two hours) and nowhere near the quality seen up north, it was a fun experience and I was glad to have caught native brookies rather than the stocked variety. In fact, I was quite surprised to find surviving natives in the southern part of the state considering last year's drought, which speaks volumes about the resiliency of this fish. 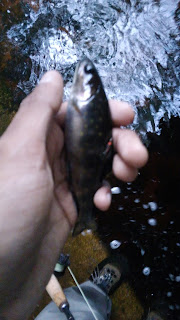 As far as size, most of the brookies in that stream were less than two inches considering how many strikes I missed. Still, it was great to see wild fish in such an otherwise populated area. Hopefully healthier flows this year should have fish in that stream reaching up to the 3-4 in. average length. Thanks again for the recommendation Matt! Your secret is safe with me. 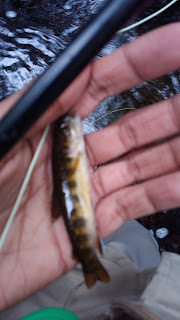 Note: I found an empty nightcrawler box next to one of the pools. Great to see that some people have such a "profound" respect for nature! Idiots.
Posted by NHwildbow on May 09, 2017