I fished one of my favorite designated trout ponds on Saturday hoping for some action. This was my first time out on my kayak this year which was odd considering how early I was fishing open water last year. Unfortunately, conditions were none to favorable when I got there. There was a massive pressure change that day, which brought forth the unusual mix of wind, rain, sunshine, clouds, etc. Plus, the water was frigid compared to my last still water trip, which was slightly more concerning. Having driven an hour, I stuck to my plan and trolled a flutter spoon (yes, I spin fish too) without much attention, except for one half hearted bump on the first pass. I did notice a pod of brookies in a sheltered cove were rising to something so I paddled back to the launch to assemble my fly rod. By the time I got back to the cove, a spin fisherman had occupied the cove but left soon after striking out there. I immediately occupied the area and tied on a #10 wooly bugger to start. That got only one reactionary bite when I cast it near a rise ring and an additional follow but nothing else. I sat back and watched the brookies and figured that they were rising to midge emergers, judging by the aggressiveness of the rises and the fact that I couldn't see what was hatching. I soon put on a zebra midge but this also didn't produce as I had a fish on for a split second that got off. Feeling a little disconcerted, I went back to trolling without much luck.
By this time, I saw another troller hook up and land a decent bow so I had a severe case of FOMO, which kept me trying repeatedly to get a bite. After making many passes with no luck, I went back to the cove to try my luck again, this time fishing dry. When I got there, I saw a couple who I noticed were fly fishing earlier, land a decent bow, making me feel even more disconcerted. According to the husband, who had landed the fish, they were having luck with streamers. Again, I tried, but no takers. This time, really losing confidence, I made multiple more passes (trolling the spoon as well as my wooly bugger) and decided to try some new water on the opposite shoreline. As I was making a pass, I saw a fish boil the surface (as many stocked fish do- not to be confused with rising). Seeing a fish within casting distance, I decided to stop and take a few casts, having absolutely nothing to lose. The first couple of casts yielded nothing but on the third cast, I decided to really slow down my retrieve to a crawl. BINGO! On my second strip, I saw a flash, felt a tug and was hooked up on what felt to be a good fish! A little while later, this came to the net: 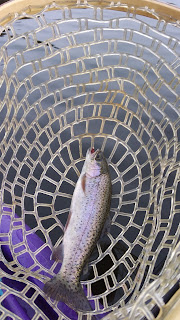 Can't say its the smallest bow I've ever caught but I can safely say that this thing punched above its weight class. I let it go and watched it swim back into its lie. The same couple that I saw earlier was fishing nearby and had landed another bow since we last talked but didn't tempt any of the surprisingly finicky brookies in the cove. I fished on for a little while longer, testing whether I had stumbled upon a pattern. Turns out that I had, as a small brookie soon came to net. 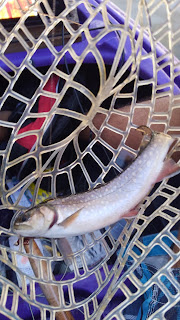 Afterwards, I got a couple of strikes but that was it considering the day was almost spent. I think the sudden change in temperature had made the fish really lethargic and quite finicky to strike. As a result, many of them were hugging the shoreline and sitting on structure and cover or tight to the bottom. Most of the people, with the exception of the fly fishing couple, that had luck that day were bait fishermen. Hopefully, a few degrees rise in temperature should improve the bite and make for some more exciting fishing. Moral of the story, always talk to people who are having luck, you may learn a couple of things to take away. Feeling more than happy to have avoided the skunk after such a hard day, I rested a little easier that night, but not for long since I was up early target lakers. Let me tell you, the cold may shut down stocked bows, brookies, and browns but it has no bearing on lake trout!
Posted by NHwildbow on May 08, 2017