Yesterday, I went out on a scouting trip to the South Branch of the Ashuelot River. This river features an extensive fly fishing only area in one of the most scenic areas in southern New Hampshire, which is fairly rare in this part of the state. The first spot I fished was in Swanzey near a set of power lines. It has great looking runs and deep holes and clear water but unfortunately I didn't see very many fish and didn't get any hits. The only fish I saw were tiny dace fry and one brown under a bridge that slunk away into the depths as soon as it noticed it was being watched.
Overall, the spot was a disappointment so I drove upstream to Route 12 in Troy. The water here was promising, lots of plunges, pocket water, and small pools. It looked like a typical mountain stream but it seemed to be virtually devoid of fish as I worked every single seam without as much as a nibble. As I walked upstream, I ran into another fisherman with his girlfriend who said that he caught a nice brookie up near a bridge. I worked my way up there but didn't get anything there, I figured that they may have not stocked it yet or not stocked it very heavily. At this point, my confidence was pretty drained so I decided to hit my back up spot on the way back home.
This is where I should have spent the day! I caught 3 native brookies and one creek chub in just 30 mins before I had to head off to other commitments. This is the result of fishing home waters, you know where the fish are and you know where to go. Scouting trips help add to that list of "home waters" and in some cases they work and in others, they don't. 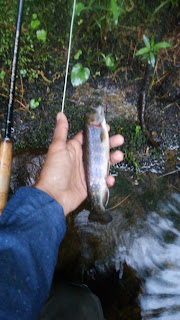 It might appear unusual that I'm calling these fish native since they are the same size (as is indicative of stocked fish), but I have a few ideas for my thinking:
I've heard the SB Ashuelot River is a good fishery and that it supports native brookies and wild browns in addition to stocked fish. Unfortunately, I wasn't able to find out for myself but it may have  just been an off day for me and I don't want to take anything away from this river without learning it more. Has anyone else fished here and would like to give me pointers? Thanks in advance.